Wake Jake – #TeamSchonesRecovery (My little brother is in a coma)

JTSchonhoft Posted on October 28, 2012 Posted in Jake's Progress
10.28.12 (Jake has a challenge ahead and I’ll be right by his side)
Long story short: My little brother Jake has taken a nasty spill down a set of unforgiving concrete steps. This happened 2 days ago and he’s currently in an induced coma. So far they have drained 80 mL of fluid from his brain. He’s on a ventilator and his body temperature is being controlled by an Arctic Sun machine. This machine essentially keeps his body at an even temperature because his body is unable to regulate it on it’s own. They’re targeting 36 degrees Celsius which he’s slowly progressing toward. They’re feeding him through an OG tube which sends liquid food straight to his stomach. He’s also on a morphine drip.

On a side note: I read online about doctors saving a patients life (in this similar situation) with fish oil.

Here are a few links to those articles if you have time to read and tell me your opinion:

CNN: Fish Oil Helped Save Our Son  (Thanks @neuhaustim, Tim Neuhaus for tweeting this at me)
Fish oil saves life of boy with brain injury (This is another article I found.)

Since I take fish oil every day and have some triple strengths in my car, I’m about to drip some into his feeding tube. Bad Idea? – We’re also considering shoving them up his ass.

To keep this short: This kid is one amazing human being who doesn’t deserve this shit. He fell out of the back of a truck going 45 mph when he was younger and suffered a fractured skull. (I will never forget that day, I even remember shouting every cussword I knew at the time.) The doctors said he was inches from dying. There have been many other accidents along the way  (We could write a book, literally – actually we are).
For those of you who know Jake, you can likely attest that he does not deserve these things to happen to him. He has everything going for him and tons of awesome friends supporting him. I’m currently sitting in the hospital room with him and a bunch of his friends. The support we’ve received on Facebook, Twitter, and Fundly has been incredible so far! Keep him in your thoughts/intentions/prayers. And for you yogis, please set your intentions for Jake in the weeks to come. There’s a long road ahead and we’re ready to fight it head first – The Schonhoft Way.
Twitter: Let’s get #teamschonesrecovery trending on twitter!
If you would like to help support Jake, please visit The Team Schones Recovery Page 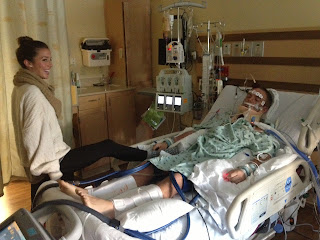